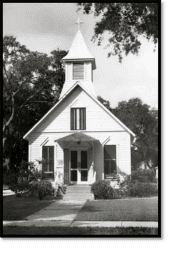 The Redemptorist Community was being actively recruited to come to Florida as early as 1867. Fathers Joseph Wissel, Nicholas Jaeckel, Timothy Enright, and William H. Gross (future Fifth Bishop of Savannah) came to St. Augustine and Jacksonville on special invitation to give missions, and revivals. Two Redemptorist missionaries also preached missions in Key West and the Dry Tortuga Islands in 1870.

Since the Minorcan community left in the 1770’s, the Catholic community in the New Smyrna Beach area was all but non-existent. Then, in the late 1800’s, Catholic settlers began moving into the area to raise crops and began to establish the citrus industry. Ferdinand and Anna Nordman, a Catholic couple with a large family, purchased the old Murray farm north of the New Smryna community. Local Catholics were invited into their home every Sunday for Mass. A priest form St. Peter’s in Deland, 20 miles away, would ride by horseback to this out mission established under the direction of Father John O’Boyle, pastor of St. Peter’s, in 1887. One of the priests who would travel to the New Smyrna community, rather than ride horseback, would ride his bike. He would ride his bike through the country and the cow manure until 1913 when he was appointed the youngest bishop (St. Augustine) in the United States at age 36.

In 1921 Father Hurley became Archbishop of Baltimore, he took the opportunity to suggest to Bishop Barry, who at the time was Bishop of St. Augustine, that a Redemptorist foundation be established in the state of Florida.

Ferdinand Nordman was a very generous man, he donated the property and all the lumber for the new church, which held only 80 people. The foundation was soon established, and Father Joseph Downey was appointed as First Superior to take charge of the little wooden church named Sacred Heart December 12, 1926. We are blessed and thankful that we have members of the Nordman family worshipping with us to this day.

The Redemptorists have also been at the Parish of Sacred Heart and St. Gerard ever since.