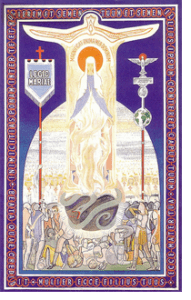 The Junior Praesidium, in the Handbook

…The Legion is able to make vivid the whole circle of Catholic Doctrine and to turn it into motive-power for every Christian purpose. But also there is an immediate outpouring of this power. It fills school time, playtime, home, and every other time, with holy, practical idealism. It gives its members a new vision of things, which is equivalent to making the world different for them – a new outlook:
(a) On the Church, once they have realized that they are its soldiers, with a definite place in its warfare, and with responsibility for its extension.
(b) On the everyday round and task. As a tiny point of light illuminates a room, so the little Legion task gives a new meaning to the whole course of the week. What the members learn and practice in the praesidium they will live in their ordinary life.
(c) On their neighbor, in whom they have been taught to see and serve Christ.
(d) On their home, which they have learned to surround with the atmosphere of Nazareth.
(e) On helping at home (or in the school if the praesidium be an internal one) in the spirit of the Legion, that is of Mary at Nazareth; seeking for work instead of trying to escape it; choosing the most unpleasant tasks; putting one’s heart into the doing of the least things; being always sweetness and thoughtfulness itself; working always for Jesus and preserving the sense of his presence.
(f) On school, for they will have absorbed to some extent the legionary ideals, and will as a consequence see school, teachers, books, rules and study in a different light. Accordingly, they will get things from school, which others would not get. So that, even if the Legion did represent time taken from study (which is the common objection), the net effect would be incomparable gain.
(g) On “duty” and “discipline.” These two all-important things, which are so odious to the young because so misunderstood by them, will be made comprehensible and beautiful when linked with those other two words: “Mary” and “Legion.”
(h) On prayer, when they realize that it is not a mere custom-imposed task but a source of power, the support of their work, and their valuable contribution to the Legion treasury and thence to the Church.

– From the Handbook, The Junior Praesidium

Perhaps it is not too much to claim that in the proper working of a praesidium on the foregoing lines lies one of the greatest possible educative influences which could be brought to bear on the young. It will develop in them every quality which is proper to the christian character, and will serve as a mould out of which will come in number holy and reliant young people, a joy to their parents and superiors, and a mainstay